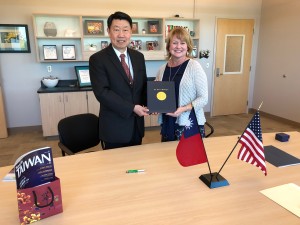 The Department of Licensing on Thursday commemorated the renewal of an agreement that makes it easier for drivers from Taiwan or Washington state to transfer a license from one place to the other.

The reciprocity agreement allows Taiwan nationals living in Washington, such as college students, to skip the driving and written licensing exams if they are already licensed to drive in Taiwan. Washington residents living in Taiwan have the same option.

In the five years since the initial deal was reached, more than 2,300 Taiwanese drivers have obtained Washington driver licenses through the reciprocity process.

Renewal of the pact was formalized in a signing ceremony in the office of DOL Director Teresa Berntsen, who was joined by Policy and Legislative Director Beau Perschbacher. Representing Taiwan were Alex Fan, director general of the Taipei Economic and Cultural Office in Seattle, and consulate Tony, Nien-Tzu, Hu.

“The signing of this agreement highlights the strong relationship between the state of Washington and Taiwan,” Berntsen said. “It also demonstrates our joint commitment to streamline the licensing process.”

Drivers from Taiwan seeking a Washington license will need to visit the Taipei Economic and Cultural Office in Seattle to have their current license properly translated and verified prior to visiting a DOL licensing service office.

The following services will continue to be available:

Driver license testing and motorcycle testing are not offered at the Spokane Valley office.

The East Vancouver licensing office is switching to a Monday-Friday schedule to better serve the needs of area residents. Effective July 1, 2019, this office — located at 1301 NE 136th Ave. — will be open as follows:

To prepare for this change, the office will be closed Saturday, June 29. The North Vancouver office, located at 9609 NE 117th Ave. (building 27, suite 2730), is staying on a Tuesday-Saturday schedule, or you can find an alternate location.

The following services will continue to be available at the East Vancouver office:

Driver license testing and motorcycle testing are not offered at the East Vancouver office.

Many services are available online.

How DOL’s efforts will support Gov. Inslee’s executive order for veterans and their families

Lourdes E. “Alfie” Alvarado-Ramos, director of the Washington State Department of Veterans Affairs, speaks Monday at the signing of Executive Order 19-01 in Olympia.

As part of an executive order signed Monday by Gov. Jay Inslee, essential new services are on the way to help veterans, military spouses, and their families build stable lives and careers in Washington state.

The Department of Licensing is honored to support these efforts.

As the executive order outlines, one way we may be able to help is to expedite the issuance of credentials — including licenses, certifications, registrations, and permits — for transitioning service members, Reserve and National Guard members, and military spouses who reside in or are relocating to Washington state. This may mean, for example, recognizing comparable military experience and credentials issued by the military and other states; pursuit of interstate compacts that allow for reciprocal recognition of comparable credentials; and issuance of temporary or provisional licenses.

More broadly, we’ll take further steps to increase the employment representation of veterans and military spouses at DOL. It’s all part of our purpose of helping all Washington residents live, work, drive, and thrive.

Comments Off on How DOL’s efforts will support Gov. Inslee’s executive order for veterans and their families |