Starting today, residents can change their gender designation to “X” on a Washington driver license, instruction permit, or identification card. The “X” is an alternative to “M” for male or “F” for female, and is available to anyone.

A third gender option ensures that all Washington residents have identification documents that reflect their gender identity. Accurate gender markers on such documents help residents of all genders access public spaces and resources, and reduce the risk of violence, discrimination, and harassment.

“Everyone deserves to have their lived experience of gender and identity reflected as accurately as possible on their identification documents,” Department of Licensing Director Teresa Berntsen said. “This, in turn, helps reduce barriers to housing, transportation, education, and employment. It’s in service to our purpose of helping all Washington residents live, work, drive, and thrive.”

An “X” gender designation will not affect the validity of identification used to comply with the REAL ID Act when enforcement begins Oct. 1, 2020. The REAL ID-compliant forms of identification issued by Washington state are the enhanced driver license (EDL) and enhanced ID card (EID), though residents have other options.

Before adding “X” as a gender option, DOL held public hearings in August in Seattle, Spokane, and Olympia regarding rule language. In June, listening sessions were held in Seattle and Spokane to solicit public opinion.

The move to allow a nonbinary designation on driver licenses and ID cards aligns with a similar rule change enacted by the state Department of Health. As of January 2018, people born in Washington can change their gender designation on their birth certificate. 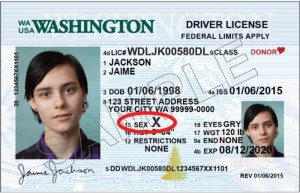 Washington residents who identify as neither male nor female will soon have the option of listing “X” as their gender on state-issued driver licenses, instruction permits, and ID cards.

But before the change takes effect — possibly as soon as October — the Department of Licensing plans to solicit feedback from the public regarding proposed rule language. Input from the hearings, along with emails and phone calls, will be used to determine if rule wording should be edited.

Join us at any of the following hearings:

If you can’t attend a hearing, you can still be heard. Submit a comment online.

Listening sessions were held in June in Seattle and Spokane to gather public sentiment on providing a third gender option. Insights from those sessions were used in drafting rule language.

The move to allow a non-binary designation on driver licenses and ID cards comes more than a year and a half after a similar rule change was enacted by the state Department of Health. As of January 2018, people born in Washington can change their sex designation on their birth certificate to reflect their gender identity.

Adding an “X” gender designation won’t affect the validity of identification used to comply with the REAL ID Act when enforcement begins Oct. 1, 2020.

DOL recently introduced two new online services that will save our customers time. The first, our Online Driver License Pre-Application, allows individuals seeking their first Washington State driver license or ID card to start the process online to save themselves time in our offices. When they do visit a driver license office, our staff simply verifies the information provided while validating their identity documents.
The second new online application is designed for teens with an instruction (learner’s) permit. After they successfully complete the required traffic safety course and driver testing at a licensed driver training school, they can go online to finalize their driver license and pay the required licensing fees without another visit to a driver licensing office. After completing the simple online process, their new license is mailed to them, saving them the second visit to a driver license office.